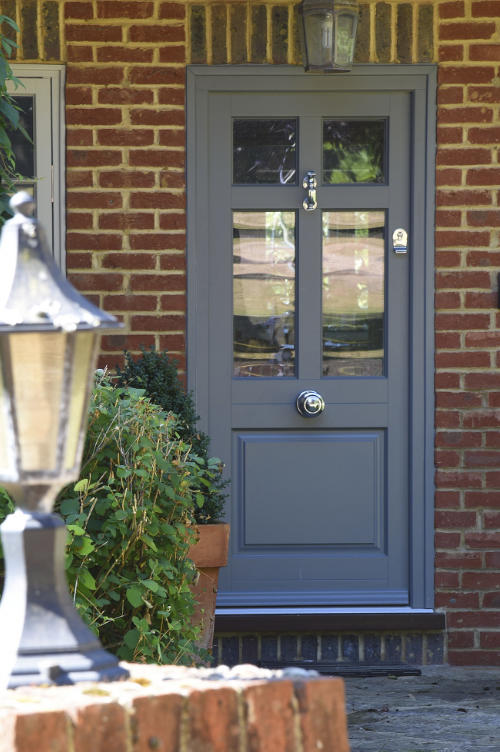 My fiancé and I bought the house about 2 years ago. It had previously been unoccupied, and a lot of work was needed to restore it” describes Mrs Fraser of her 1980s family home in the West Sussex countryside

When we moved in, the windows in place at the time were in an awful state. They had cracked and their style was a bit too ‘fussy’ for our liking. We wanted a more simple, timeless look

Through her research, Mrs Fraser found her local Timber Windows showroom in Horsham. She liked the products on display and visited on a few occasions to get more information and explore the range fully.

I don’t like being sold to and one of the companies that were going to give us a quote ended up walking out because I didn’t want to hear their sales pitch! Thankfully, Andy at Timber Windows is fantastic. He isn’t pushy at all and he always had time to answer our questions which really made the difference

A selection of French doors, flush casement windows and two entrance doors were specified for the Fraser’s home. All are finished in ‘Porcelain’ with 18mm astragal glazing bars with the entrance doors in ‘London Grey’.

We are gradually putting our stamp on the house and the new windows and doors have been an important component in this. They have given us that timeless look we desired while also being a close match to the originals, so they suit the house perfectly 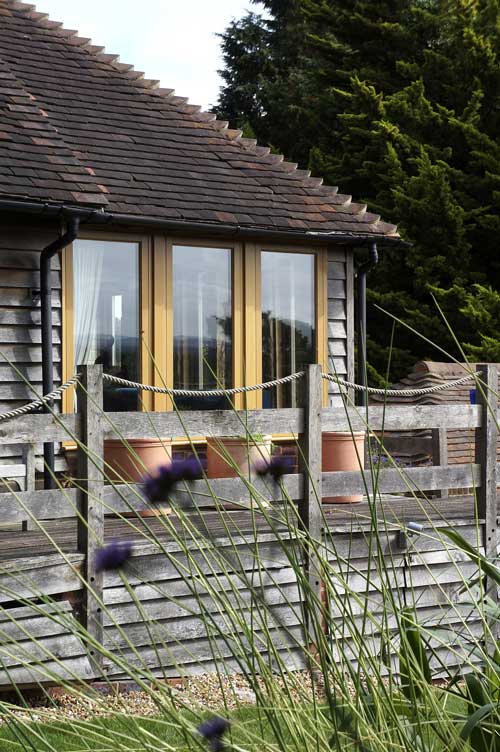 In the Sussex countryside, Mr & Mrs Roberts reside in their charming timber home.

Being an exposed location, they’d started to feel the effects of the outside through their original
wooden frames.

Their new windows have meant the character has been retained using a stained finish; a nod to the structure of the building while giving a fresh appearance.

Describing the difference their new windows have made to the house. Mrs Roberts says, 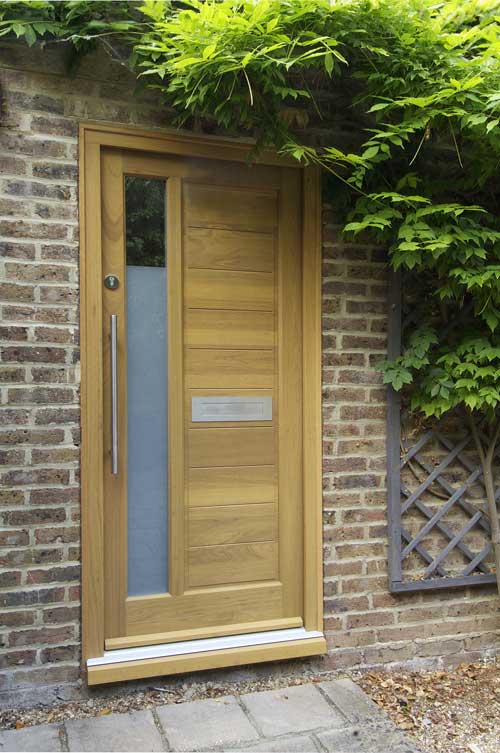 ‘The new doors have made a big difference to how we use the house” Mr & Mrs Turner excitedly explain that the new Bi-Fold, and entrance doors have changed their home in East Sussex very much for the better.

The Turners never felt the previous doors did justice to the house and its rooms, “the old doors looked unsightly, particularly those that preceded the Bi-Folds; they were messy in both their design and function, as they wouldn’t even open properly.”

Opting to transform their lounge and main living area, they decided a spectacular double set of Bi-Fold doors would work best for them. Chosen in Engineered Meranti Hardwood and finished in a Light Oak stain, with 4 leaves per set of doors, the homeowners were aiming for maximum impact, whilst combining this with the practical consideration of obscured glass in the toplights to avoid the glare of direct sun from above; ‘the proportions of the framework to glass area now look absolutely nght.”

“The Bi-Folds make the outside area feel like an extension of the house; we love opening them up for entertaining and often sit both in and outside with the doors wide open.”

Elsewhere In the house, casement windows, French doors and a new Contemporary front door have been fitted. “Previously the front door was solid making the hallway dark, but its now lovely and light. The day after the installation, we noticed such a difference. We love the design, and kept with a classic  look for longevity Mr & Mrs Turner explain. They chose a ‘Dowr’ design door in the same Light Oak finish with townhouse locking system, a Guardsman pull handle and brushed metal letter plate.

“All the items are fitted beautifully, feel very solid and much more secure. We’re very happy with it all” 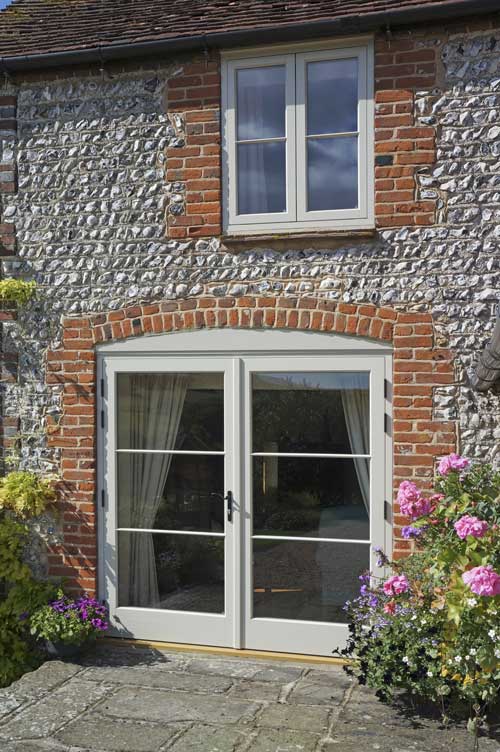 When Mr & Mrs White received a leaflet through the post from Timber Windows, they weren’t looking to replace their windows and doors at that time, “we kept the flyer as the style and approach to marketing were tasteful, and gave a good impression; we liked the look of what was on offer.”

WE WOULD GENUINELYRECOMMEND TIMBER WINDOWS TO ANYONE, & HAVE ALREADY PUT A NEIGHBOUR IN TOUCH

This first Impression continued when they made their visit to the Timber Windows of Horsham showroom, “we also visited a number of other window companies including a local joiner, but were left feeling underwhelmed by their options once wed seen the Timber Windows product range. and knew this was what we wanted .- it was a lovely showroom with lovely staff too” 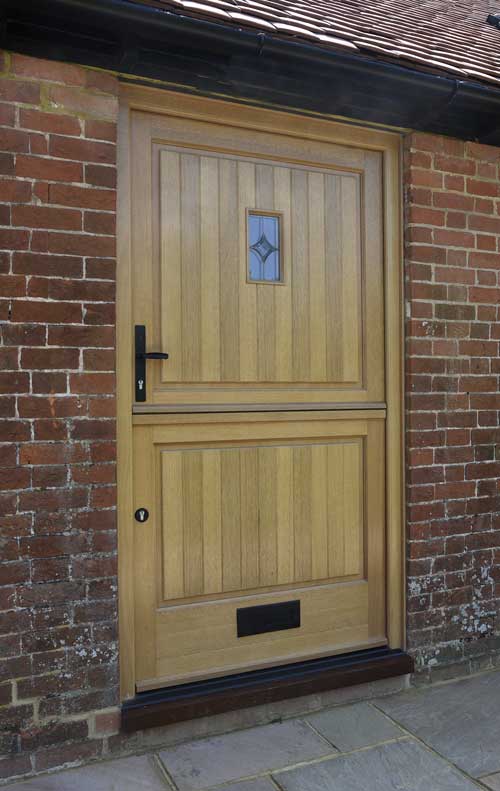 On the edge of the South Downs National Park In West Sussex, sits this original stable building within the grounds of Mr Venn’s home; the building s being developed into a two bedroom holiday cottage.

MrVenn describes the origins of his home, “the house and grounds were part of a country estate; our house was one of the cottages tied to the estate and sold off about ten years ago.”

“The planning restiictions on the stable building meant it had to be preserved. It would
probably have been financially a lot less expensive to knock it down but we were happy
to be custodians of it, and have done essential works such as underpinning and
replacing the roof”

“The existing openings had to be retained, meaning where the ohginal stable door was another stable door had to go in its place”  this has made for an extremely oversized door but a stunning feature.

The stable door is manufactured in Meranti hardwood at 2.2 metres high and 1.2 metres wide with a ‘Light Oak’ stain finish and antique black ironmongery.

“We also love the feature window, which also started out as a door but we were given permission to make this a window instead

Elsewhere the flush casement windows are finished In ‘White’ with Monkeytail ironmongery in various sizes and proportions to suit the original openings of the building.

In their main house, the Venn’s had previously had a poor experience with windows fitted 10 years ago when they first moved in, “unfortunately we realise now that those we chose were lesser quality in solid wood that have not stood the test of time” this is In contrast to the Timber Windows product that is engineered, multi-layer timber for strength and durability, “so we have been gradually replacing the windows in the house with new ones from Timber Windows too.”

“The guarantees offered on the products were an important consideration for us. Overall we’re very  pleased with them so far and particularly love the stable door.” 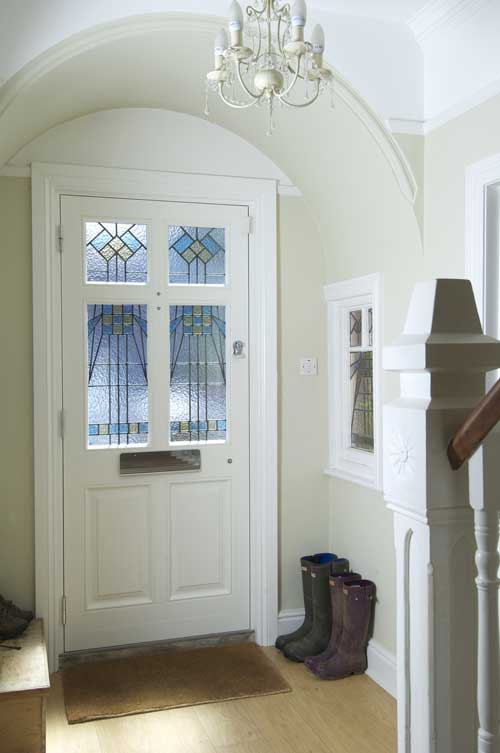 Restoring their home in a Sussex seaside town to its former glory was main aim for Mr & Mrs Smethurst. Whilst giving it a much-needed update was important, there was no need to reinvent its appearance so it was also critical to replicate and retain the original look.

“We’d lived in this house for 12 years with beautiful, but very draughty and cold”

Sash windows were specified all round, including Venetian sash windows to the upper rooms; these are a style common to many period properties featuring fixed Outer sashes and a sliding centre. Decorative horns, 18mm astragal bars and a White painted finish were also chosen.

The front door is a Frenchay design finished in French Grey externally, and White internally, It also features chrome ironmongery including a Samuel Heath letter plate. The glass design is a bespoke recreation of the original design from their previous front door.

“We spent a long time trying to find a suitable replacement front door, and we’re happy that we’ve now found one that does the house justice along with the windows.”